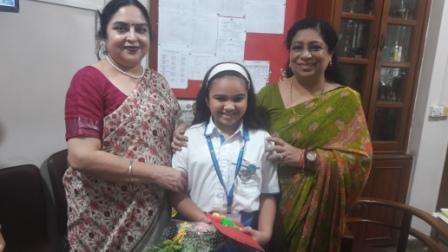 It was an unexpected cloudburst that flooded out the Mumbai streets on September 4, 2019. Although the school was left early in anticipation of heavy rains, and most school buses reached students safely home – but Bus No. 12 wasn’t as lucky. It got stuck in the rising waters on the streets as rains lashed on mercilessly.

However, thanks to volunteer parents accompanying the children in the bus – the children weren’t stranded mid way. Mr. and Mrs. Prabhudesai, Mr. Dalvi picked up the children in their arms and transported them to safe haven – Krishna temple nearby. Upon receiving distress call – more parents rallied around to help. Mrs. Agarwal, Mrs. Jangid, Mrs. RoyChowdhury, Mr. Chavan and Mr. Gada brought fresh supplies of food and dry clothes for the children in the temple. They calmed down the children and provided them much-needed emotional support at the time. Shehnaz didi, the bus attendant, helped the rescuers earnestly.

Dr. Kanavia, Mr. Lunia, Mr. Rathod, and Dr. Tated rushed to the rescue of children stranded in Paul van. They carried the children to their houses and looked after them until the floods receded.

Dr. Tated, Mr. Gada and Mr. Dalvi could not come to school due to prior commitments and hence, their children were felicitated on their behalf.

These flood fighting parents set a sterling example for our children to follow – to volunteer and to always be helpful in the hour of need. Principal Ms Alka Agrawal and Principal Designate Ms Damanjit Kaur Sabherwal lauded the parents for their act of courage and charity.