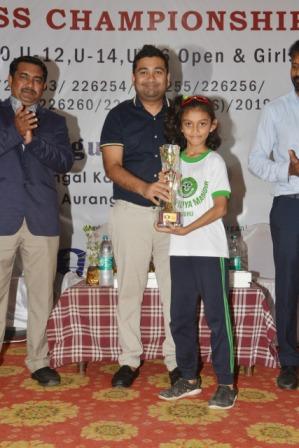 Prisha Kesrwani, standard 3 A, notched the second position at the recently held State School Chess Championship (Under 8 -G) in Aurangabad from 27th  to 30th  August 2019. She received a trophy and certificate for her moves on the chessboard. Prisha thus qualifies to represent Maharashtra as a seeded player in National Schools tournament (second consecutive year) to be held in November.

Young Prisha also participated in all the three formats (Rapid, Classical, Blitz) in Western Asian Youth and Junior Chess Championship (under 8 girls) held at New Delhi from 5th  – 10th  September, 2019. After a stint at the international Asian championship recently, she is angling for ratings the other two formats as well.  She secured 7th position in Blitz, 13th  in Rapid and 15th  in Classical format and was awarded with certificates.